The following description is my personal view of the subject and is based on my collecting experience. I will stand corrected if anyone finds flaws in my text....

In addition to the excellent article on these pouches elsewhere on this site, I thought it could be interesting for many to compare original pouches with known fakes..

The Parachute First Aid Packet (Medical Department N° 9778500) was issued to every parachute wearer during WW2.
This pouch did NOT replace the standard first aid packet issued to every GI. It was an extra piece of equipment containing a Wound Dressing, Morphine Syrette and Tourniquet, and sometimes a note on how to use the Tourniquet and Morphine.
In addition to Aircrew and Paratroopers, the packet was issued to every member of the US Assault Forces (infantry, crewmembers of DD tanks, etc) for Operation OVERLORD; the Normandy Invasion.

The pouch was made of rubberised fabric that could be tied to any equipment by means of the attached straps.
First Pattern pouches were equipped with a zipper and marked FIRST AID in large letters on the front. 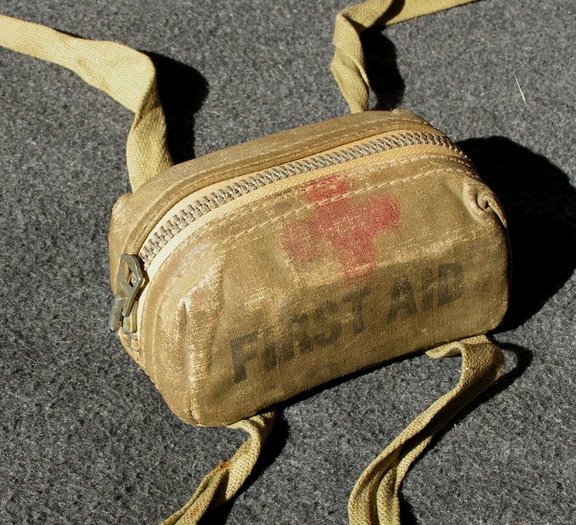 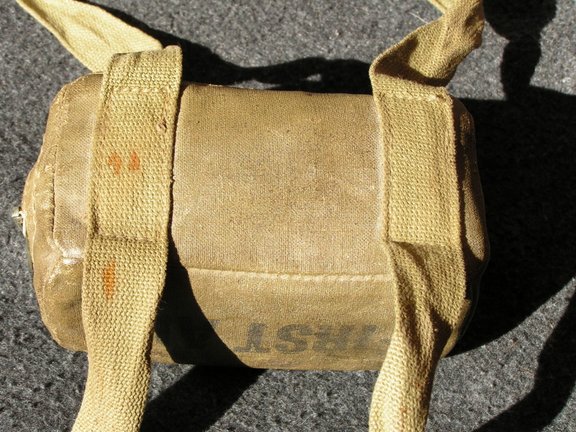 Above photo's courtesy of Rick Larson

These were superseded by a heat-sealed pouch that was to be torn open before use.
This second pattern came in both light and green od and is the pattern most collectors want for their Normandy and later impressions.

Today this has become one of the most sought after items in US Militaria and they are very expensive (original and complete ones go as high as $1000 US Dollar and up!!) and therefore a lot of reproductions exist as well.
I saw the first reproduction in Normandy in 1984 during the 40th D-Day Anniversary, but the quality was bad. The quality of these reproductions has improved ever since!!

The pouch is made of a sort of rubberized canvas material to which two straps are sewn. At the pouch are two notches at the upper and lower part to facilitate ripping it apart. The space above the notch on the upper side is ALWAYS bigger than the one on the lower side. Only at the best quality reproductions this is also the case.
Apparently the most difficult thing to reproduce is the lettering “FIRST AID”. I have never seen a reproduction with the right type of lettering!! The words 'First Aid' should be well aligned and crisp. On almost every reproduction the lettering is not crisp and most of the times it's rather blurry....
The letter type is a sort of “Times New Roman” and has serifs. On the greener types, the serif is missing on the right underside of the “F” and on the underside of the second leg of the “R” (look at the picture).

During the production of the pouch, 4 dots, where the two straps were fastened, were printed together with the lettering. These dots are missing at bad quality reproductions; the reproductions of better quality do have them, but usually they are too big!! These dots are positioned in a way that when the straps are sewn on the pouch, you can ALWAYS see 2 dots at the place of attachment; either one dot on each side of the strap or two on the left or the right of the strap depending on the place of attachment of the strap.
The strap was secured with a “zig zag” stitch”.
Here a picture of an original pouch below and a better quality reproduction on top. On both the dots are visible, as it should be.

After reading the above, you can identify the LEFT pouch in the following picture as an original, while the right one is about the best quality of reproduction you can find on the market these days. Both are unissued.

Here a picture of two reproductions on the left and on the right an original pouch.

Pay attention to the difference in distance between the notches and the edge upper and lower part of the pouch.

After some (re-enactment) usage it is very difficult to keep them apart.
'29th, Let's Go!'

And then there are some oddities:

In September 2006, the following pouch was sold at the JAG Show in the US. It had the crisp lettering but the straps are sewn in a different way and the dots are replaced with narrow lines.... It looks however 100% original...

The French book D-Day Paratroopers, The Americans, list another model pouch on page 100. Next to the standard contents, it also has Wound Tablets.
Until recently these were considered reproductions by most collectors as these pouches were never encountered in the hands of WW2 vets, BUT at least two of these have been dug up in Holland, and are relics from the Market Garden Jump!
Note the block letters and method of stitching of the straps....

Dug up pouches from Holland!

Feel free to add any info or corrections to this thread!!!!

Please show your pouches and add to this discussion... Maybe someone has other variations??
'29th, Let's Go!'

Dear Johan,
I was expecting this ... should you not have brought up the subject spontaneously yourself, I would have triggered you to do so !
Thanks a lot for sharing these precious data with our Forum members !
Best regards,
Alain

P.S. I visited Wavre yesterday, but you didn't show up
MRC Administrator

Alain wrote:P.S. I visited Wavre yesterday, but you didn't show up

I might try to come the Wommelgem in August or Wavre in September.
'29th, Let's Go!'

Hi Johan,
Can only really echo what Alain has said. Many thanks for kindly sharing this comprehensive Article on this item with us. I am sure that as I have done, the readers will find it most useful when trying to identify a genuine piece from a post-war reproduction.
I don't suppose you happen to have the USAAF Stock Number for the so-called First Pattern zippered pouch, do you? The reason I ask is that Alain and I had contemplated putting together an Article dedicated to this subject, but were trying to research the early pattern pouch, thus far to no avail.
Thanks again,
Ben
Ben Major
MRC Administrator
ben@med-dept.com

Users browsing this forum: No registered users and 6 guests