I found the question of POM markings raised on the G503 forum here and posted a link back to this article and your markings database page. Hopefully you can gather some more markings. Just thought you would like to know.

Thanks Peter, I will be sure to keep checking the post to see whether nay of the guys over there have been able to provide additional bar codes or units.

I have now been able to add a further three POM Markings to our Database, and this time they are supplied with their specific unit information. The new records are as follows:

In addition, I was able to discover that the codes beginning with 43### were reserved exclusively for use by the 1st Infantry Division. It's probably safe to assume that the first two numerals were in fact unit specific, and reserved for Division sized units.

In case anyone else is able to add additional markings to the list, please feel free to contact me.

thanks for collecting and creating a database for the POM Markings.
Have three items in my collection which might help, too: I am pretty sure the yellow and black symbol painted on the chest represents a unit of the 1st Infantry Division.
These insignia can be found painted on the sides and front bumpers of the Division's vehicles too.
This particular insignia could have indicated 2nd Battalion of the 26th Infantry Regiment.

As for the lower Duffel Bag, there was a Captain Charles Powell in the Regtl Service Company of the 116th Infantry Regiment of the 29th Infantry Division. Don't know his Serial Number though...

johan willaert wrote:As for the lower Duffel Bag, there was a Captain Charles Powell in the Regtl Service Company of the 116th Infantry Regiment of the 29th Infantry Division. Don't know his Serial Number though...

Many thanks for kindly registering with our Forum and sharing these great items from your collection. I have meanwhile added the code to our database, so hopefully we can soon add a Unit for that code.

With regard to the yellow and black circle marking, as Johan has already indicated, I believe these were assigned to the 1st Infantry Division and attached to bumpers and other items. I did read somewhere that these markings replaced the standard TAT markings (To Accompany Troops) for specific units but haven't been able to find any proof of this. I know that the 29th ID also had its own too (Johan will probably know better than I, being a 29th buff).

Thanks for sharing, and kind regards,
Ben

thanks a lot for that info!

Do you have pics or a link to historic pictures showing this yellow and black symbol painted on vehicles? As I'm a Dodge enthusiast, picture of a Dodge would be more than great.

no problem, I'm very happy to help filling the database

Florence wrote:Do you have pics or a link to historic pictures showing this yellow and black symbol painted on vehicles? As I'm a Dodge enthusiast, picture of a Dodge would be more than great

The Divisional HQ had a star in a circle in black and yellow, painted on front bumpers and sides of vehicles 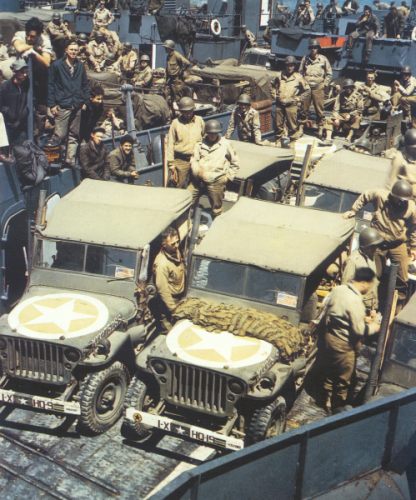 Other pictures known show GMC trucks towing 105mm How Guns from the 32Field Artillery and GMC trucks from another unit.

The Inf Regts had a circle with up to 3 horizontal stripes for the different Regts (16-18-26), while the Artillery units had a square with horizontal lines. Above the lines you sometimes see numbers for the Battalions or other markings for units (A-B-C or AT etc...)
'29th, Let's Go!'

Good Stuff Johan! I always wondered what the box meant on the door of that ambulance. Did you find this documented somewhere or is it just from observation?

Sylvia - welcome to the USMD crew. Now you'll get to find out all the stuff that Florence would carry and what it all means.

sgtpeter wrote:Did you find this documented somewhere or is it just from observation?

To date the different tactical symbols of the 1st Inf Division for Normandy have not really been researched or published; at least not that I know of.
So what I know comes from observing original WW2 pictures showing the markings in use.
I believe these markings should have been used after erasing the letter coded unit markings, for tactical purposes, but for some reason, the Big Red One vehicles retained their original letter markings and had the tactical ones applied next to them. Of course this doesn't make sense in a tactical way, but allows for better identification of the different markings.
These are visible on several color images which we have all seen in various books and sites in recent years.
One can only wonder why the BRO vehicles were marked with huge stars and white bumpers, for the Normandy landings. It doesn't make sense from a camouflage point of view....
Next to these yellow/black tactical markings the BRO vehicles were also painted with the color coded 'invasion bars' accompanied by the 5-digit number code, as shown on the pictures above (example 43020 for HQ-1st Inf Division)
So 1st Division vehicles were actually identified three times on the front bumpers......

A similar system was used by the 29th Inf Div, and they did it following the rules as the larger unit codes (generally found on the left side of the bumpers as you look at them) were replaced by the Tactical Signs (except on Vixen Tor, the Jeep of the Division Commander, which carried both markings).
And luckily a list of the different signs for the 29ID has survived, so identifying vehicles from that division is not that difficult.


Here's an overview of the 29th Markings, from Jon Gawne's article in the French Militaria Magazine (all markings should be bordered in yellow too) A Jeep from the Divisional Reconnaissance Troop in France

Thank you for kindly posting up Jon's research. I knew I had seen this somewhere before, and as I remember there was a short discussion about these over on the USMF.

I have meanwhile contacted a friend who works at the US National Archives in order to try and obtain the Annex for the 1st Infantry Division, along with the numerous tables that contain the Unit Codes. I'll be sure to keep everyone informed of any data which might be received. I think we're certainly get a lot of data together about the numerous types of shipping markings etc.
Thanks to everyone that has contributed so far - hopefully we'll be able to add more data.

P.S. Since this has thread has turned into a great reference, I have moved this into the Reference Forum.
Ben Major
MRC Administrator
ben@med-dept.com

I received the following item from the United States today. It's an M1935 Bedding Roll, but I purchase it mainly for the interesting variety of POM markings which can be seen on it. As you'll see from the photographs below, this bears both types of bard codes (those with and without a letter suffix). Also of interest is the fact that the Roll seems to have been reissued at some point. It was originally issued to a Capt. Walter P. ????? (ASN O-393916) and then later to a Matthew Wirtz (ASN: O-1287638).

It looks as though there are some unit designation markings underneath Matthew Wirtz' ASN, but I am unable to make them out - is anyone else able to decipher the markings? They seem to be HQ?-22I-E?

Also of interest, is the fact that the supposed earlier type of marking (with letter suffix) has been painted OVER the 5 digit version seemingly unique to Operation Overlord.

I'd certainly welcome everyone's comments on this one.
Thanks,
Ben

johan willaert wrote:I am pretty sure the yellow and black symbol painted on the chest represents a unit of the 1st Infantry Division.
These insignia can be found painted on the sides and front bumpers of the Division's vehicles too.

This is the motorpool of the 3rd Battalion/18th Inf Regiment of the 1st Infantry Division in Germany, early 1945 (National Archives Photo)
'29th, Let's Go!'

This thread caught my eye, as my father's mussette bag had these markings.

Family lore (which I know well not to trust) held that unit information had been painted over at some point for security reasons, though even as a kid I wondered why they would have used three stripes of paint to cover over something.

Anyhow, my father's unit was 6th Armored Division, 212th Armored Field Artillery Battalion, HQ Section. The stripes are very faded, but appear to be be:

Users browsing this forum: No registered users and 1 guest